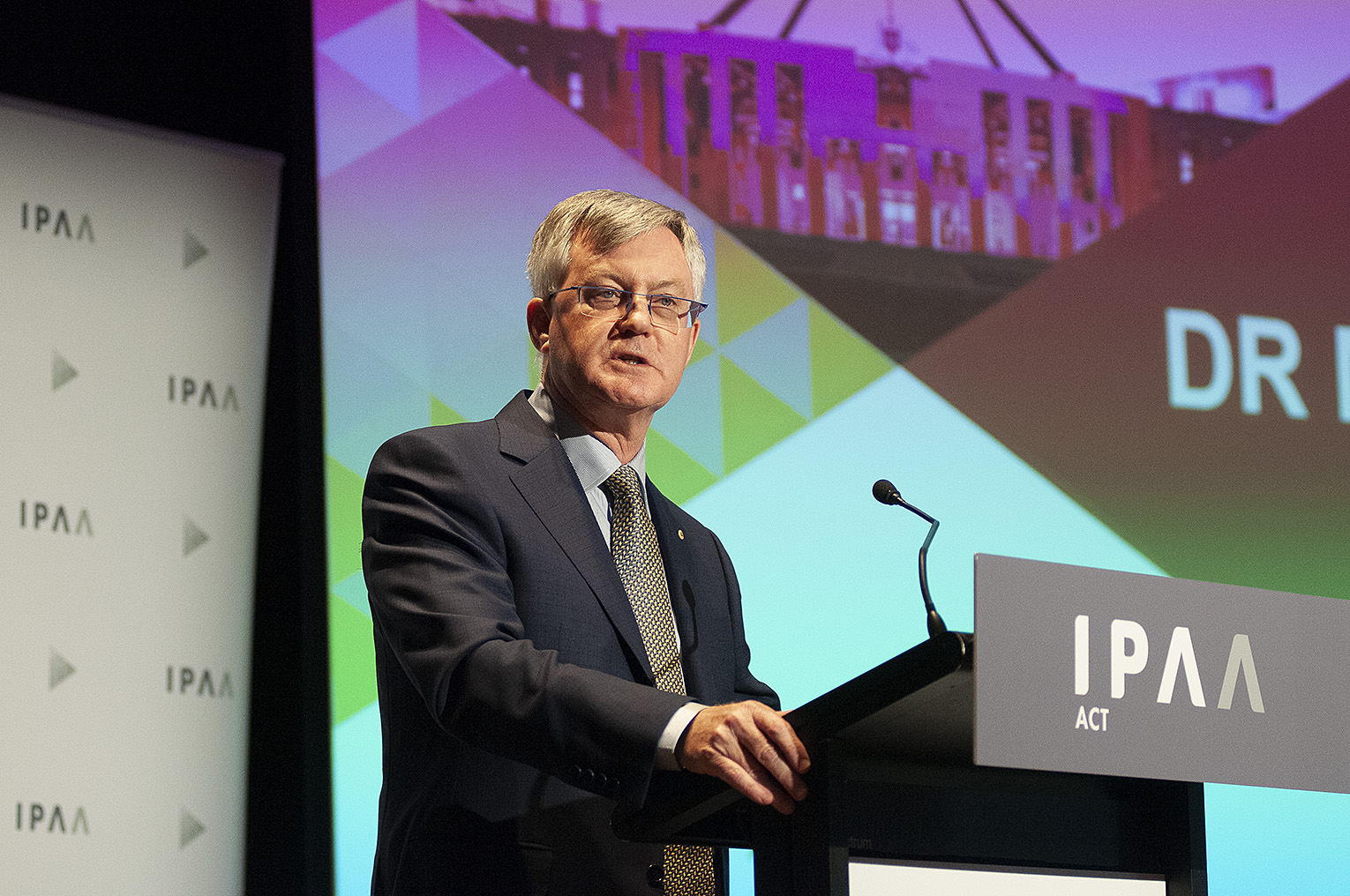 There was an air of anticipation amongst public sector leaders gathered to hear the valedictory address of Dr Martin Parkinson AC PSM, Secretary of the Department of the Prime Minister and Cabinet on Monday night.

Dr Parkinson has served directly under ten Prime Ministers and over a dozen Cabinet Ministers during his career — most prominently as head of the Department of Prime Minister and Cabinet, Treasury Secretary and as the inaugural Secretary of the Department of Climate Change.  He observed that “every single one has had the best interests of the country at heart, although they have had different visions of what that was, and different means of achieving it.”

Dr Parkinson began his address by speaking about his own experience growing up in Australia, initially in Stawell and later in Adelaide — flagging the important role of education to a working class kid in the days “when that meant something different to what it does today.”

He also called out “the fantastic mentors and colleagues who’ve helped shape and guide me as a leader — none more so than the fabulous EAs who’ve been with me every step of the way”.

Dr Parkinson reflected that the past is a foreign country — “it was an Australia of accepted commercial sexism, smoking behind the sheds and casual racism.”

He went on to say that

“it was also an Australia where a kid from a family without means could be the first in their extended family to finish high school. A country where what mattered for success is how good you are, not who you know. Where whatever your cultural background, if you could punt a footy forty metres you were alright. To me, this is the part of Australian culture that’s most worth preserving.”

He said that each of these jobs taught him something: Treasury taught him “just how hard it is to change an institution, even from the top”; and that he had not

“really comprehended the challenges of leadership until faced with setting up the Department of Climate Change. Not only were there organisational challenges in setting up a department from scratch, but I was serving Ministers responsible for the most divisive issue in the country.”

Dr Parkinson called out the essential need for an “international perspective in many parts of government… if you don’t understand the interplay of the economic and the strategic, you’ll be destined to only ever see half the challenges and half the opportunities, available to us”.

He reflected on his fortune in having worked with world class political leadership “especially the Hawke/Keating and Howard/Costello government, that cut tariffs and opened up this country to the world in the 1980s, 1990s and early 2000s.”

And he outlined the challenging environment governments now operate in with technology and the rise of emerging countries around the world: “Today there is no consensus on what reform looks like… future public servants will have a much more difficult time than I ever had”.

He noted that many of our regional and global institutions are struggling: “It’s hard for the IMF and World Bank to protect the global financial systems and address poverty when their membership doesn’t come close to reflecting the GDP shares of emerging countries.”

Dr Parkinson argued that “most of the cracks in the international rules-based order are due to the shift in economic weight from the Trans-Atlantic to Asia” reflecting that “we don’t know what any new world order will look like.”

He cautioned that “what we cannot allow to happen here in Australia is the kind of retreat from openness and vilification of differences that we are seeing overseas” and that “we will need to make use of every one of our advantages in coming decades if we want to sustain our prosperity and security.”

Dr Parkinson observed that “there are really only two choices for this country: We can take pride in our diversity and use it as an advantage when interacting with the world, or we can hunker down behind borders and slowly gnaw at each other.”

He closed his address with the words Kissinger once said that “every road will get you nowhere if you don’t know where you are going” and he finished his years of service “having done my best to help our political leaders find the right road.”

A transcript of Dr Parkinson’s address, a video of his speech, and a series of photographs from the event are available from the IPAA ACT website.