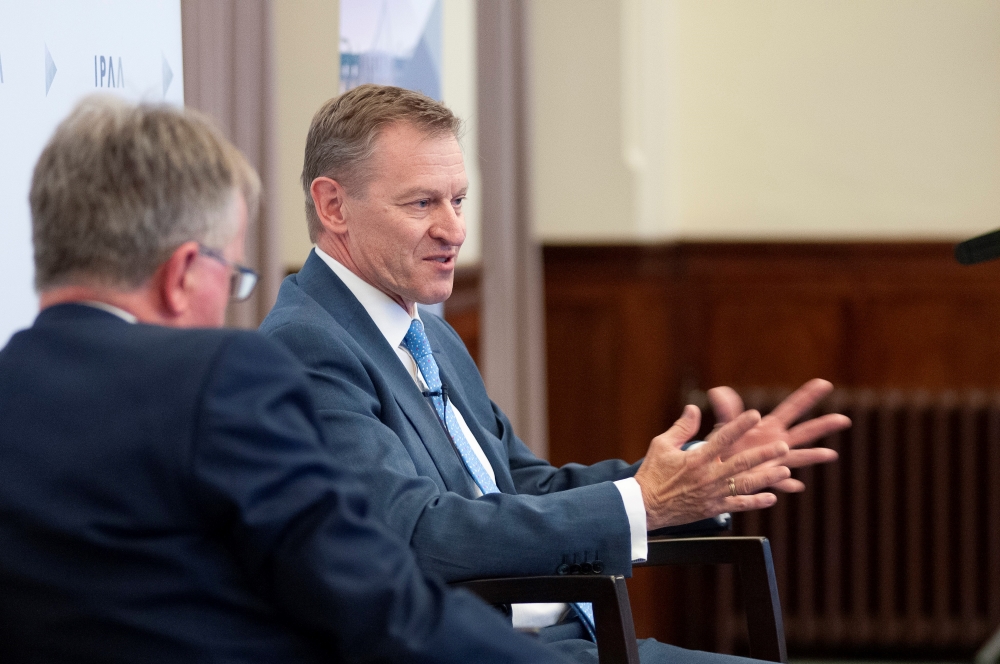 On a late Spring evening, in the old-world splendour of the Museum of Australian Democracy at Old Parliament House, Mr Michael Manthorpe PSM, Deputy President and Board Member of IPAA ACT and Commonwealth Ombudsman, introduced Mr David W. Kalisch to make his final public address as the 15th Australian Statistician with a warm acclamation:

‘David has always made sense, always added value… and what comes out of his mouth is worth listening to.’

David noted that people come into leadership roles with ‘a range of experience and sometimes some baggage’ and that it was very helpful ‘to have invested in your leadership skills and capabilities’:

‘Ultimately, leadership is not about you — it is about the influence you have on the organisation to promote positive change. Make the best decisions you can, for the organisation, with the information you have, and if you need to make a better decision in the future, do so.’

David flagged that ‘leading an agency was palpably different to SES roles’. As the accountable authority he said, ‘you soon realise that staff hang on your every word and intonation’.

David described how leadership required courage and reminded the audience of senior public sector leaders that there are ‘no superheros with all the leadership attributes’.

‘The leadership team that you work with is critical. I have seen the major benefits to ABS from a leadership team with a diverse range of experience, capabilities and perspectives, but this means you need to be courageous enough to foster dissonant voices that challenge your own preferences.’

Asked about the importance he placed on media management, David said he had had some exposure to the media prior to joining the ABS, most notably in relation to the Australian Government taking on the management of Tasmania’s Mersey Hospital under the Howard Government and also in relation to the Family Tax Benefit. Nothing however, prepared him for what was to come with the 2016 Census. David’s tips to public sector leaders on working with the media?

‘Media training is essential… you really should do media training. You’ll get more comfortable… and you need to be well prepared.’

Transforming the organisations that you lead

David reflected on his experience in leading organisational change at the ABS — one of Australia’s most trusted organisations with a history stretching back 114 years — observing that every task an organisation undertakes ‘is an opportunity for the organisation to learn what is should do better in the future’.

‘If you want to successfully transform organisations, you need to commit for years, not weeks or months. You need to be persistent, engaging regularly with staff about performance gaps and organisational reform, using metrics to gauge progress, and transparently reporting progress to staff and stakeholders’.

David flagged how the lessons ABS had learned from its tumultuous experience of the 2016 Census were not only critical to its successful delivery of the Australian Marriage Law Survey one year later, but also an improvement in ABS’ organisational performance — including its relationship with stakeholders, levels of staff engagement, and measures of staff wellbeing. This had enabled the ABS to deliver increased public value to the community.

However, David cautioned that despite the gains achieved by the ABS to date, ‘organisational reform is never finished, it needs to be ongoing as the organisational context will keep changing around you’.

David described how governance helps the ABS to deliver quality outcomes and accountable processes: ‘it should not be set and forget; it requires regular attention’.

‘…we have adapted our organisation structure a number of times to help deliver the business, considerably improved our risk maturity, regularly considered our risk appetite, drew in advice from external experts to challenge internal thinking, pushed more decision making down to middle managers, sharpened internal policies and reset committee.’

But added two cautionary notes:
— Governance arrangements, when taken to extremes, can excessively divert resources from delivering better services to the nation.
— Consider whether governance changes are the best means of improving organisational performance, when, for example, the underlying problems may be around workforce capability and culture.

David described how — in addition to continuing a strong tradition of graduate recruitment and professional development for staff — the ABS had taken steps to build a more diverse workforce which had helped to deliver quality information and enabled it to better respond to organisational challenges:

‘Gender diversity helps, and we achieved 50/50 gender equity with our SES early in my tenure. But you also need diversity across a range of dimensions and still maintain a balance between deep internal knowledge and other professional skills and experiences.’

He noted that there are emerging risks for the ABS and other APS agencies in attracting and developing people with data expertise, with the international labour market demanding more people with data capability and a domestic economy that is not producing enough of these skills.

From David’s perspective it was not just about ‘collecting a workforce with impeccable CVs and experiences’ but that the ‘culture around how people work’ was just as important, with ABS achieving cultural gains from a number of strategies in recent years.

Reflecting on the importance of partnerships and collaboration for the ABS, David said:

‘…the APS as a whole does not draw on ABS capabilities and skills as much as it could. I still see a strong cultural paradigm of some Departments seeking to build their own special capabilities. Unfortunately, particularly in these specialist areas, generalist managers and staff may not know what they need to know, creating risks to all of us, rather than benefiting from partnerships with centres of expertise across the APS.’

When asked which of the recommendations from the Thodey Review were most important, David urged those attending not to wait for the response to Thodey Review — he would be ‘beating the drum’, seeking to understand where there are areas of deficit and the gaps in workforce capability, and ‘going hell for leather’ now.

The importance of technology

David reflected on the value and promise of technology, as well as the risks it brings to organisations.

‘Technological change enables ABS to do much more with data than was feasible a decade ago, such as drawing new information insights from linking large data sets. Machine learning is improving the efficiency and accuracy of our internal statistical processes, our virtual data lab is enabling over 2,000 people to safely access our microdata and linked data from their desktops, and we are using APIs to disseminate office statistics more effectively to key users. ABS has been an early adopter of Cloud, to improve scale and security.’

David cautioned against the promises of the technology salesman that seem too good to be true.

He also acknowledged that while technology can be an enabler, it can also be a source of vulnerability for both operations and reputations noting that the ABS is having to devote more of its scarce resources to regularly enhance its physical data security at the expense of resources available for statistical production.

Keeping a sense of perspective in the face of adversity

David had never experienced anything like the media, social media and political response to the 2016 Census previously in his career.

‘You need to maintain perspective, integrity and authenticity while the maelstrom is at its peak, as this helps the organisation keep its focus and ballast. Focus on what is required, internally and externally, to deliver the outcome while also professionally engaging in the media and social media.’

David took pride in the ABS and community response to the 2016 Census— ‘by the first weekend after Census night, the Census response had recovered back to our forecasts’ — ultimately delivering data of commensurate quality to past Australian and comparable international Censuses.

In reflecting on the aftermath of the maelstrom, David said:

‘False perceptions can… be very sticky, and it can take a lot of time and effort to correct misunderstandings among those who should know better… New media operating and the shrill voices in social media are a modern reality, with plenty of scope for the APS to improve its capability to engage with the media and contribute factual information to public debates.

‘…In those challenging times, look after the welfare of your staff. Draw on the support others will provide, including your family and friends.

‘As much as possible, ensure you and your organisation are in best shape to make outstanding immediate decision that are then often scrutinised by others at their leisure. And, again, take as many learnings as you can from every experience.’

The curtain falls on a dedicated public servant’s career

In his closing remarks David W. Kalisch thanked his colleagues and friends for the many shared opportunities and collaborations over his career.

‘Public service may be maligned in some quarters, but I can think of no better way to have spent my working life with many of you as we sought to improve essential services for our fellow citizens and better inform important decisions of governments, business and the community.’

He was thanked by Michael Manthorpe PSM for his ‘wonderfully insightful and reflective farewell’ and received a sincere round of applause from those who attended.

A copy of the speech given by David W. Kalisch on 28 November 2019 is available from the IPAA ACT website.

← Winners of the 2019 PM's Awards for Excellence in Public Sector Management Satya Nadella: insights for Australia’s public sector from the Microsoft CEO →