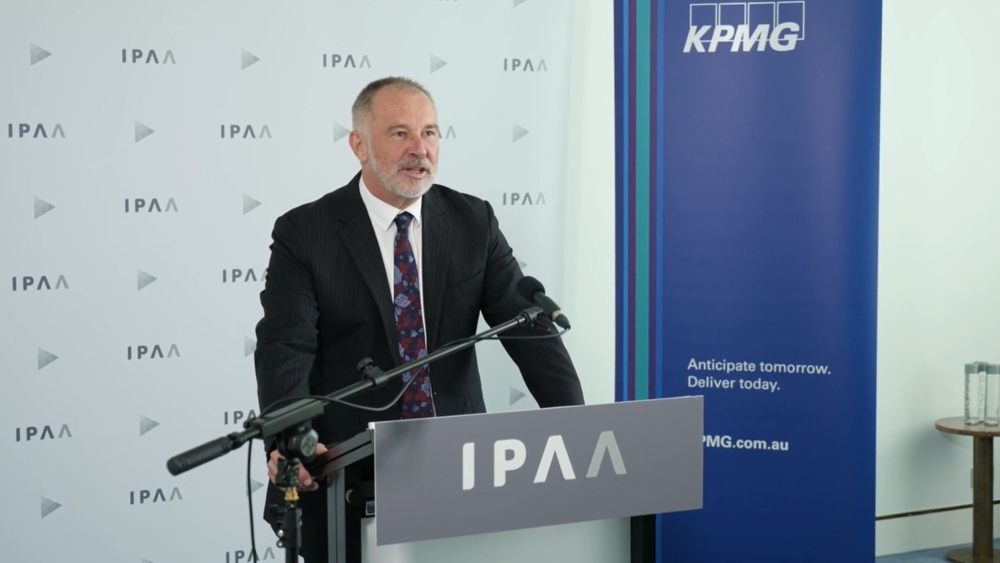 The award of National Fellow is made annually to individuals who have made outstanding contributions to public service and to the Institute of Public Administration Australia, a tradition dating back to 1983.

Dr de Brouwer congratulated each of the new National Fellows on receiving this prestigious award and thanked each of them for their contribution and service.

The new National Fellows include:

National Fellows are entitled to use the post-nominal FIPAA.

Information on the 2020 National Fellows

Chris Dawson has provided long standing, distinguished service to the public sector in Western Australia in senior leadership roles within the Western Australian Police Force and was appointed Commissioner in August 2017.
In his time with the agency he has made a number of significant changes improving its capabilities to deliver a safer community for all Western Australians. This a personal investment in his agency’s relationship with Aboriginal and Torres Strait Islander people.

Chris has also been responsible for coordinating the State’s response to the COVID-19 pandemic as the State Emergency Coordinator.

Chris is a strong supporter of IPAA WA, making time whenever his exceptionally busy schedule allows to speak at IPAA events. He is also a member of its Professional Development Special Interest Group.

Professor Evans has an international reputation in supporting change governance practices as a senior policy adviser and lead investigator on research and evaluation projects for 26 countries, the European Union, the United Nations, and the World Bank.

Mark has worked with every Australian state and territory and most Australian Government departments on change governance issues. In his current role as Director of Democracy 2025 — a joint initiative of the Museum of Australian Democracy and the Institute for Governance and Policy Analysis at the University of Canberra — Mark has driven a process of national reflection and renewal on how trust can be built and democratic practice strengthened in Australia.

Mark has served as an IPAA ACT Councillor since 2015, led several important discussions on public trust for the IPAA ACT Future Leaders Program, and chaired and spoken at several IPAA ACT events including the 2017 National Conference.

Christine Feldmanis has more than 30 years’ experience in financial management in the government and private sectors.

She has significantly contributed to the development of better governance processes for public sector bodies, and has been the Independent Chair — or Member — of the Audit and Risk Committees for some of New South Wales’ most significant public sector bodies, including the Departments of Justice and Communities, Premiers and Cabinet, Finance Services and Innovation, and Education, as well as Transport for NSW and the NSW Treasury.

For more than five years, Christine has generously supported IPAA NSW as a member of the Audit and Risk Committee, providing the Division with confidence to undertake a range of major projects which focused on investment in internal capability development: through the introduction of a new IT system, and a complete internal restructure of IPAA NSW in response to the post COVID-19 needs of the public sector.

Currently the Victorian Public Sector Commissioner, Adam has an abiding commitment to transformative public sector leadership and fostering cultures of collaboration and innovation.

Under his leadership, the Department of Environment, Land, Water and Planning attained gender parity, not only across its executive management team, but also across all of Victoria’s water boards.

Adam developed the All Roles Flex policy which eventually became a service-wide initiative that enabled employees to have a meaningful level of control over when, where, and how work is accomplished.

Adam was recognised with a Public Service Medal in 2018 for outstanding public service to a range of government departments in Victoria, and has been a Male Champion of Change since 2015.

Adam has contribution to a wide range of IPAA events across Australia. He was made an IPAA Victoria Fellow in 2013, and served as Deputy President on the IPAA Victoria board from 2015 to 2017.

As CEO of Zoos Victoria Dr Jenny Gray has fundamentally changed the way the organisation defines itself, firmly placing the organisation at the forefront of Victorian threatened species conservation, with an unwavering commitment to its continued evolution.

Jenny has led the transformation of Zoos Victoria’s three zoos by aligning every aspect of their operations with achieving conservation gain. In 2017 she published ‘Zoo Ethics’, a book drawing on her PhD experience examining the ethical challenges posed for the operations of zoos and aquariums in the 21st Century.

Jenny remains an active member, speaking at IPAA Victoria events, most recently as ‘guest provocateur’ at the Integrity and Ethical Leadership Program alumni event held in May.

Elizabeth Kelly has been an extraordinarily effective senior leader in the Australian Public Service, working across programs with responsibility for innovation, digital strategy and industry support; service-wide responsibility for machinery of government, Cabinet, legal policy and governance issues; coordination of support to the Prime Minister; civil justice and legal services; strategic policy and coordination and ministerial support.

She has been a strong advocate for public service innovation, and as Deputy Secretary for the Department of Industry, Science, Energy and Resources recently led four Australian Government task forces supporting the Department of Health by securing supplies of personal protective equipment and medical devices for the National Medical Stockpile as part of the government response to the COVID-19 pandemic.

Elizabeth has played a significant leadership role at IPAA ACT in its transition to new governance arrangements, including a move to a company structure and the establishment of a Board.

Rick Persse has had a significant influence on a number of new initiatives across several government portfolios in South Australia, including the creation of Shared Services SA, and championing the government’s ‘Transforming Criminal Justice’ agenda.

In his current role as Chief Executive for the Department for Education, Rick has led two significant machinery of government reforms delivering on the recommendations of the Child Protection Systems Royal Commission. He also presided over the first major reform of South Australia’s education legislation since 1972, establishing a contemporary framework for delivering high-quality children’s services and compulsory education in the state.

Robert is currently Commission Chief Executive of the Queensland Public Service Commission. He has worked in chief and senior executive roles across the Queensland Government in the policy portfolios of education, agriculture and primary industry, and public sector employment — as well as the private sector.

Robert has an outstanding leadership record in corporate governance, organisational reform, and leadership development. Most recently he designed a whole-of-sector recruitment process for all Director-General positions, was the principal architect of a collaborative governance model for the Queensland Government Chief Executive Leadership Board, and led the delivery of a sector-first Employee Mobilisation Service in response to the COVID-19 pandemic.

There is no stronger nor more visible champion of IPAA Queensland than Robert, guiding its strategy for building an impactful and financially stable organisation. IPAA Queensland’s successful re-establishment, over a nearly 5-year period, is testament to his commitment, persistence, and careful stewardship.

Mark Webb is Chief Executive of the NSW Department of Parliamentary Services, leading several major initiatives that include the development of the NSW Parliament’s first 10-year Strategic Investment Plan, a new technology platform, and a significant organisational reform program that attracted the single biggest government investment in the NSW Parliament’s history. He also managed the Parliament’s COVID-19 response with its catering team supplying meals to vulnerable members of the community.

Previously as Executive Director for Innovation and Services at the NSW Public Service Commission, Mark was responsible for the implementation of a sector-wide innovation strategy for whole of workforce data collection and reporting functions.

Mark is Vice-President of IPAA NSW and Chair of its Audit and Risk Management Committee. Most recently, he led a major organisational restructure of IPAA NSW in response to long-term changes in the NSW public sector and the immediate impact of COVID-19.