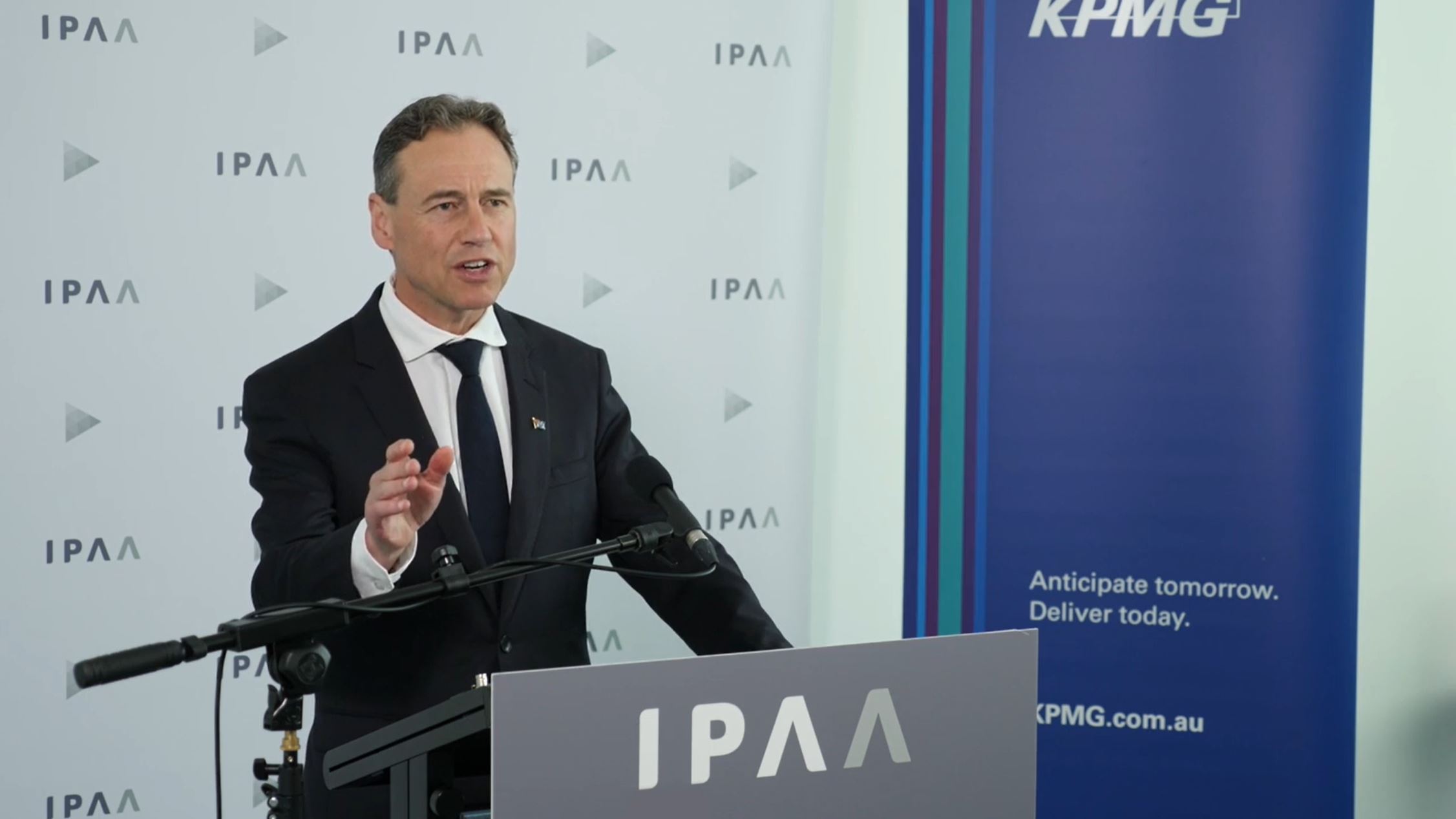 The Hon Greg Hunt MP, Minister for Health and Minister Assisting the Prime Minister on the Public Service and Cabinet

“I want to acknowledge our extraordinary public servants in this, the year of COVID-19, arguably the greatest challenge Australia has faced since the Second World War — an economic challenge, a health challenge, a national challenge.

So I want to begin by honouring and thanking each and every one of you for the contribution you’ve made — but its not just in the Australian Government Public Service but in all in of the tiers and levels of service and public support across Australia — because it’s been a challenge. It’s been a global challenge.

But in this year Australia’s public service, in all of its manifestations, has shone brightly.”

So began the Hon Greg Hunt MP, Minister for Health and Minister Assisting the Prime Minister on the Public Service and Cabinet, in his delivery of the 2020 Garran Oration — ‘Innovation of the Age of COVID’ — which was broadcast across Australia on 21 October 2020.

“What this year has taught us is not only do we arguably have the finest public service in the world and I mean that absolutely, but we can be more innovative in faster time frames in a safe way than we had every realised. And that’s something I’ve learnt myself.

The foundations of public service

Minister Hunt spoke first about the Westminster System and the foundations of public service, touching on three principles.

The first principle was independence:

But above all else, the lodestar was ‘Are they helping the Australian public?'”.

The second was courage:

“In terms of courage, what I’m focused on is this notion of frank and fearless advice.

Now, in many ways it’s sometimes held up as a cliché, it’s not.

There are numerous debates and discussions that ministers and public servants have. Numerous ones that I’ve had, every day. And so, through that process, what I have seen is that the conversations I most value are when I’m challenged. And I can tell you that’s the case for every minister.

That doesn’t mean there aren’t moments where it will be frustrating for the public service or for the minister or for others, but it’s that process of contestability which actually produces accountability and the best policy. That’s why Cabinet matters.”

The third was capability:

“Our role here, in terms of the traditional Westminster structure, is to keep building the capability both of the service and of the individual.

And I want to set out some ways later on that we can do that, but that means we are building individual training — lifelong training throughout your public service time.

Flexibility to move between different roles and to move in and out of the public service.

I am a big believer that one of the adaptations we can have for the Australian service is to have people moving in and out and to give them experience outside and to bring outside experience within.”

Innovation in the year of COVID

Minister Hunt then turned to the response to the COVID-19 pandemic.

One example of innovation the Minister provided related to the rapid migration to whole of population universal telehealth — something that prior to the pandemic had been scoped as a ten-year plan.

“In ten heady days, we took a ten-year plan at the end of March and we were able to bring whole of population universal telehealth into being.

We accepted that it may not be perfect, that most of the constraints which we would ordinarily require… because of the necessity of a country going into lockdown, because of the need to keep doctors and patients apart where possible to protect both the health system and the frail, elderly and so many others.

We took these decisions and we did it through a process that involved Cabinet, National Security Committee and Expenditure Review Committee — the three principle arms of the Cabinet governance system — but with intense hour-by-hour strategic design, and micro-detailed design by the public service. And what that saw was that we, through a series of stages, brought universal telehealth online.

As I speak, over 35 million telehealth services have been delivered in Australia.

It’s arguably the largest revolution in healthcare delivery and Medicare since Medicare was introduced. And what was begun as a temporary measure will be a permanent measure.”

The Minister went on to say:

“That system, developed iteratively but rapidly, lifted all of our sights: that we can do grand design and reform quickly. A lot of pressure and you wouldn’t do it that quickly outside of an extraordinary event, but we can do it far faster.

And so, I think when we’re conceiving a policy we need to think of the policy, a longer-term approach but then can we do it in an expedited approach?”

“To touch the lives of millions and to improve them, that in a way is the Holy Grail for public service in Australia.

And we can do it: that’s the lesson.

We are an innovative nation, and our structures can cope with change in a rapid way.”

The Minister then turned to the role and process of Cabinet.

The rigours, even if it’s in a short timeframe, of going through the National Security Committee, which became the engine room for our response to COVID, of going through the Expenditure Review Committee, which challenged whether it was JobKeeper or JobSeeker, the whole process it helped mould and shape through multiple iterations, those policy outcomes; and then the ultimate overview of Cabinet where it should be collegiate, but everything is open challenge. “

The Minister went on to speak about the advent of the National Cabinet.

“The National Cabinet was borne of an awareness of what occurred during the Spanish Flu when the Federation fractured and so what Scott did, is he deliberately constructed a fast-moving National Cabinet built around the leaders who were able to make decisions in principle, in real time, in a Cabinet and collegiate structure.

That doesn’t mean that 120 years of competitive federalism have suddenly disappeared overnight — that’s a reality of a federal structure and always will be — but the collegiate structure was embedded and made permanent and displaced COAG and is therefore a far more collaborative body.

Sure, there’ll be challenges: there always will be. But most importantly, there is a collegiate structure which is fast-moving, leader-driven and responsive to the time.

And that is a lesson in innovation which has served Australia profoundly well.”

Turning to the Future

Minister Hunt then spoke about the future — the adaption, development, and evolution of public service.

He started by flagging the importance of lifetime training for individual public servants, and enabling their continuous growth through education and mentoring.

He then focused on the concept of the public service, saying that it has been, and will be, enriched by diversity, and by bringing people in at later stages of their career.

“I think that that’s a very important part of what we’re doing in Australia, of inviting people in, of bringing them in at later stages in their career, and allowing people within public service to move out of that service for a period of time.”

The Minister also touched on flexibility and mobility in the public service.

He closed with a national perspective of public service.

“I think what has happened, is that the nation has seen the value of the Australian Public Service. The natural cynicism, much of it’s fallen away.

They have seen that people have worked overnight, around-the-clock.

They’ve provided air bridges in relation to test kits, they’ve ensured that what we’ve had with PPE has been different to the experience of the rest of the world.

All of those things have been done by a public service that’s been motivated and committed and passionate.

And so, the very concept of the public service has been renewed this year.

That’s what COVID-19 has done. It’s renewed our internal belief and it’s renewed the public’s faith.” 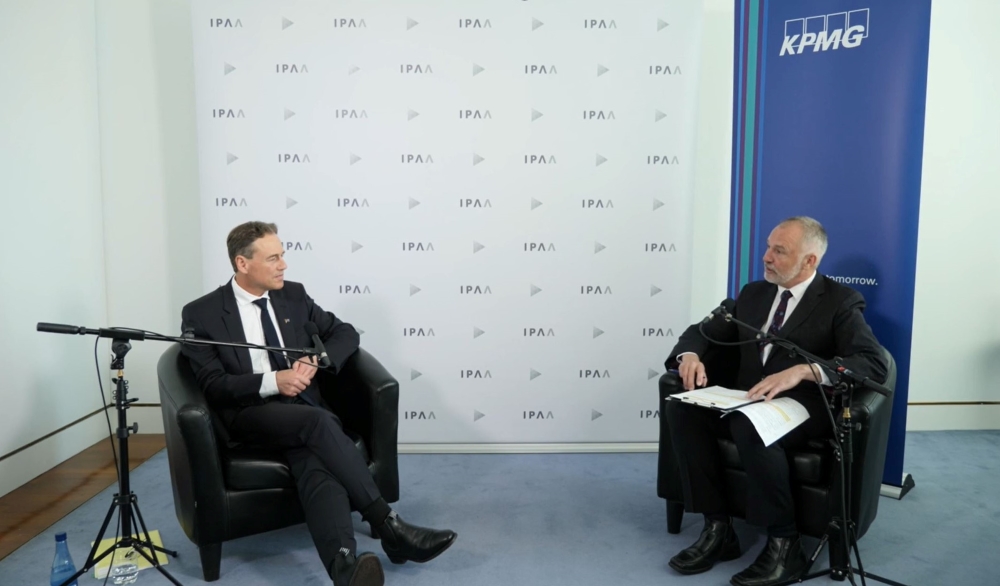 Following his oration, Minister Hunt joined Dr de Brouwer in conversation and discussed some of the themes from his oration in greater detail, including the Minister’s thoughts on public sector innovation and learning, risk appetite and managing expectations, and the federation and different roles of government.

The Minister also discussed Australia’s relationships with some of the world’s international institutions before Dr de Brouwer asked him what he had discovered about himself during these monumental times.

“The longevity. That when people say things are a marathon, not a sprint, this was an ulta-marathon …

From the bush fires at the very beginning of January — they were just beginning to wane when Brendan Murphy called and said, ‘I’ve just listed novel coronavirus out of Wuhan as a disease of pandemic potential’ on the 21st of January — and that hasn’t stopped.

So, it’s the longevity and the fact that you can deal with that so long as you’re building the things that you need. And for me the two things that I needed were exercise and family. And if I can have those two, I’ve learnt that no matter how far the horizon is, I can pretty much get through it.

It doesn’t mean there aren’t difficult days in intense pressure, but frankly I’ve seen that they’re the keys for me.”

Dr de Brouwer then shared some questions provided by IPAA members across Australia.

The questions touched on what the Minister foresaw in terms of long term changes in how the public sector delivers services to citizens, the skills young people need for a successful public sector career, and the issue of trust in institutions such as the public service.

The Vote of Thanks 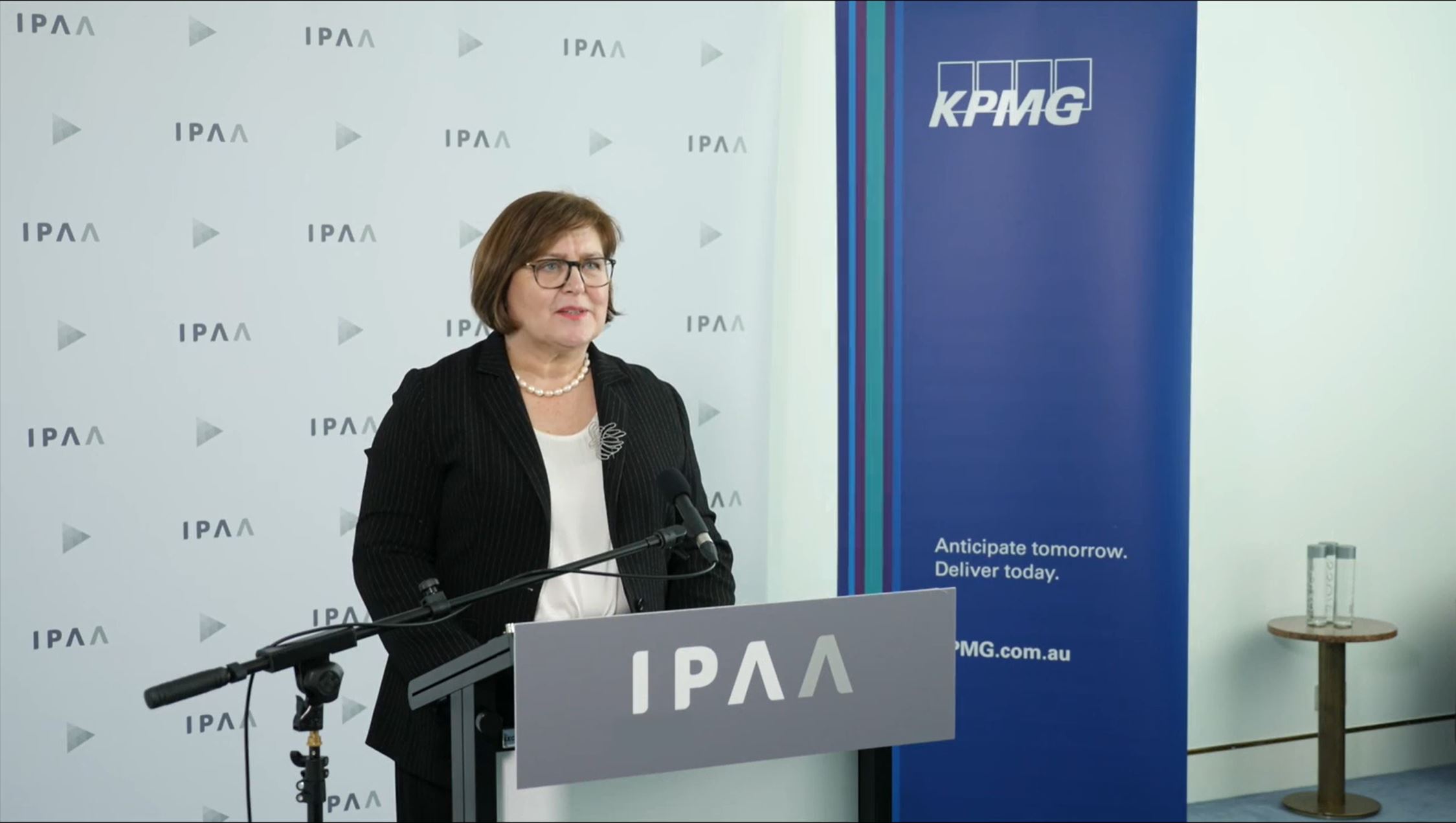 Cath Ingram, Partner and Chairman KPMG, and IPAA ACT Board and Councillor, delivered the Vote of Thanks to Minister Hunt.

Cath Ingram — Partner and Chairman KPMG, and IPAA ACT Board and Councillor — delivered a Vote of Thanks, thanking Minister Hunt for his Garran Oration.

“KPMG has a long association with the Garran Oration and your contribution today joins the ranks of many distinguished speakers.”