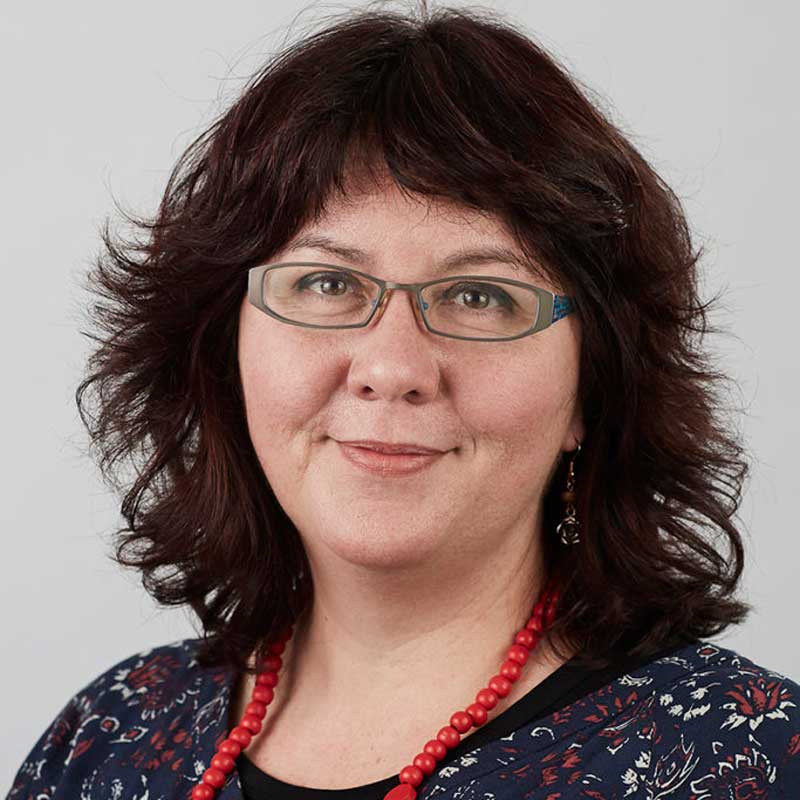 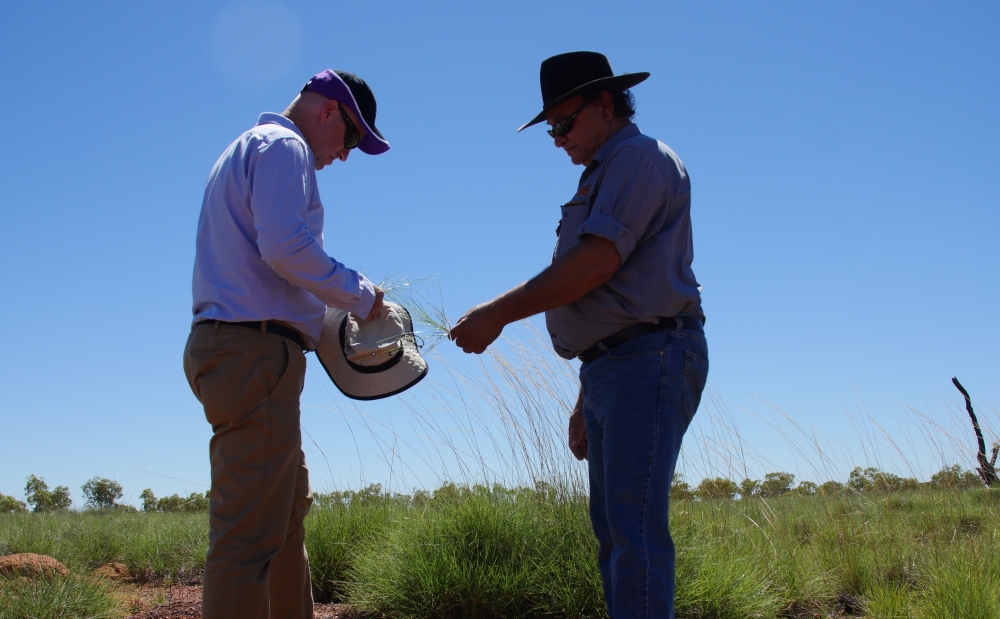 Professor Darren Martin (left) and Associate Professor Colin Saltmere (right) examine the qualities of native spinifex as part of a collaborative research project between the University of Queensland and the Indjalandji-Dhidanu traditional owner group that has the potential to create an entirely new industry. 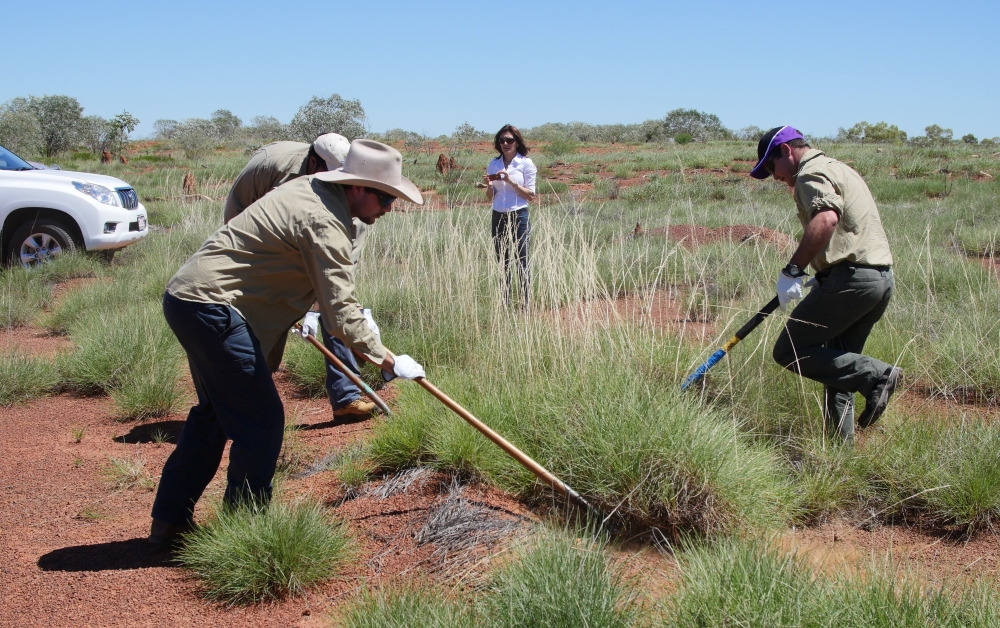 Myuma trainees collect spinifex as part of a collaborative research project with The University of Queensland while researcher, Dr Nasim Amiralian, looks on.

The project has created 12 jobs for Indigenous people to undertake harvesting and first-stage processing of spinifex at a facility in Camooweal, North-west Queensland.  The spinifex is then processed using a nanocellulose extraction method to make super-thin, sensation-transmitting latex. The technique has attracted strong commercial interest.

The latest issue of the Australian Journal of Public Administration contains a gem of a research paper by Catherine Althaus on the exciting contribution that Indigenous evidence and knowledges can make to public administration in the fields of engagement, sustainability, and policy innovation.

Catherine Althaus is the Professorial ANZSOG Chair of Public Service Leadership and Reform at the Public Service Research Group at UNSW Canberra and ANZSOG Deputy Dean. She is a non-Indigenous academic woman who has been privileged by the great generosity and hospitality of Indigenous peoples from across Australia, New Zealand, and Canada. She has also observed with frustration the many barriers to the contribution of Indigenous knowledges in the scientific and policy-making realms.

Catherine starts by tracing some of the contemporary reasoning in favour of such acknowledgement and prioritisation. She then turns to practical examples to demonstrate how the field of public administration and the practice of policymaking will benefit (including a discussion on the potential barriers to uptake). And she closes with a call for dedicated and respectful work by the discipline and practitioner communities.

There are implicit assumptions — both misguided and counterproductive — in privileging the western paradigm as best practice. The assumption is that ‘there is a single public administration standard that applies to all humanity to which we should aspire’ and that ‘privileging the Anglo-American approach suggests that public administration is about a form of governance that emphasises execution separate from politics and as opposed to the attainment of goals’.

Catherine argues that the global preoccupation with the Anglo-American ideal type plays down the possibility – and desirability – of other administrative forms that have proven independently throughout history such as those put forward by Dreschler: classical Chinese Confucian and Islamic Caliphate forms.

Catherine notes that modern American and British superiority in the public administration ‘industry’ seems to have been realised through the elite achievements and credentials of the Oxbridge and Harvard education systems, and the selling of practitioner-led expertise sine the Blair era. However, she suggests ‘this superiority is under threat due to the Trump and Brexit forces beleaguering their democracies and the rise in superpower and trading status of China and India’.

‘Opportunity abounds for countries such as New Zealand or Canada or Australia… to wrest the mantle of western superiority from their bigger, more prominent cousins — or hopefully — to forge new ways that move beyond the universalizing principle to respectfully address or incorporate Indo-Pacific and other traditions.’

Catherine highlights the neat parallel between Dreschler’s arguments with the work of Iaccarino in 2003 who argues that western science has many lessons to learn from the way that other cultures ‘do’ science:

‘The key link in the movement of discussion from Dreschler’s public administration to Iaccarino’s science is the notion of evidence. In Dreschler’s western public administration, scientific notions of evidence are favoured as the gold standard of preferred knowledge. This scientific understanding is rooted in European sensibilities and philosophical concepts emerging from western Christendom.’

She then presents a series of evidence and knowledge models that powerfully convey how modern western science is predicated.

Catherine then looks at how policymaking and public administration fit in to a fluid contemporary legitimacy environment:

‘Although science tries to fill the void of uncertainty with hierarchies of evidence, policy makers turn to a mix of rational and irrational forces. These forces are pieced together through networks and policy communities where informal and formal rules of the game help structure and frame data gathering and prioritization of information sources with recourse to gut feelings, habits, belief patterns, and the emotion of storytelling and narrative.’

She touches on the 2016 work of Cairney, Oliver and Wellstead who suggest persuasion as a critical force for addressing ambiguity, something that was well established through Greco-Roman times. She then turns to the 1989 work of Majone who helpfully distinguishes the differences between facts, evidence, and truth.

And she highlights that ‘recent policymaking and public administration endeavours have returned the discipline — and to a lesser extent the practice — to the prizing of connection between facts and values.’

Indigenous Ways of Knowing and Being

Aboriginal and Torres Strait Islander peoples across Australia represent the world’s oldest continuing culture with 65,000 years of enduring civilisation. There are many examples where their knowledge provides extremely valuable evidence to feed into policymaking and public administration, but as Catherine notes:

‘It is important from the start to remember that hundreds of individual Aboriginal and Torres Strait Islander nations exist, each with their own cultures, practices, beliefs and languages. Within this context, land and water management, species management, weather knowledge, Indigenous medicine, food and plant knowledge, clothing and design knowledge and governance, law and societal practices, and knowledge preservation and curation itself… are just some of the areas that present unique evidence bases that warrant attention and respect.’

And she draws on the 2006 work of Larkin to remind us that: ‘Indigenous evidence needs to be interpreted not just simply as another knowledge base and potential source for action but also as a reflection of a fundamentally different set of values, at civilizational, philosophical, and research levels’.

Barriers and Opportunities to the Uptake of Indigenous Knowledge

In response, Catherine suggests that:

‘What non-Indigenous people and knowledge systems can do is move away from paternalistic approaches that historicize Indigenous knowledge as static when all evidence points to its dynamism, rigor, and resilience. They can also pay respect to self-determination of Indigenous peoples and ask them what they wish to do with their knowledge not only for themselves and their communities but also for others.’

How Policy Would be Different if Indigenous Evidence was Considered Properly

Aboriginal and Torres Strait Islander peoples remain subjected to racism, intergenerational trauma, and other injustices. However, several commentators have detected a movement in the voices and views of mainstream Australia, especially younger generations, that may provide a welcome opportunity for the uptake of Indigenous evidence.

Catherine argues that at least two significant shifts in policymaking demonstrate the possibility of what Indigenous evidence can offer.

The first of these shifts relates to products.

One product Catherine highlights is the incorporation of the advice and knowledge of Aboriginal elders, such as ‘cool-burn patch’ or ‘mosaic’ burning, into agricultural, land management practices as a means of land regeneration (see the media reports by Chenery in 2017, and Brown in 2016).

Another product is derived from spinifex — traditionally used by Aboriginal communities in the construction of houses, fish traps and smoke signals. Catherine describes how a partnership between researchers at The University of Queensland and the Indjalandji-Dhidhanu People of the Camooweal region has seen the development of a nanocellulose extraction method to make super-thin sensation-transmitting latex. The latex has a range of applications including the production of condoms and medical dressings, for use in cleaning oil spills, and as a component of flexible electronic displays. The commercialisation of this technology was only possible with the expertise and input of the traditional owners and is likely to result in significant financial success as Memmott and others described in 2017.

The second of these shifts relates to processes.

Indigenous ways of knowing and being have also led to new ways of thinking about engagement and conflict resolution. Catherine argues that this is highly relevant to the policy contest space and in how to incorporate values and morality into the policymaking system in new ways.

One process that incorporates Indigenous ways of knowing and being is in sentencing courts.

There are over 50 Indigenous sentencing courts in all Australian states and territories except for Tasmania. As Elena Marchetti described in 2009, these courts use Australian criminal law to sentence Indigenous offenders and allow Indigenous Elders and respected persons to participate in the process. Evaluations of the County Koori Court and the Children’s Koori Court have found that these alternative sentencing forums, often referred to as circle sentencing, have successfully promoted deterrence and improved rehabilitation (see the 2010 work of Borowski and that of Dawkins and others in 2011).

Another process where Indigenous ways of knowing and being add value is in the field of evaluation.

Catherine explains that experience in the field of evaluation shows that Indigenous ways of knowing and being, as well as Indigenous research methodology, directly shift the way that evaluation is conducted, results communicated, and engagement and co-creation is achieved. This involves the incorporation of principles such as respect, relevance, reciprocity and responsibility (see Kirkness and Barnhardt’s 2001 work as well as the 2006 work of Scougall).

Catherine argues that when Indigenous ways of being and knowing are packaged together as a set of principles, shifting the demands of engagement and evaluation, they set a different bar. The field of Indigenous research methodology, when coupled with discrete methods such as yarning circles (see e.g. the 2011 work of Holmes), holds great promise for fresh ways to approach community engagement in a meaningful way and deliver co-created evaluation outcomes as Hunt described in her work from 2013.

Catherine believes that if public administration and policymaking remain isolated within western paradigms, then debates regarding evidence-based policymaking will only move so far.

Her article contends that ‘the time is ripe for recognition of other paradigms that witness the intrinsic contribution and value of other civilisations and cultures’.

And she concludes that:

‘If we accept openness to the possibilities and worth of Indigenous perspectives on evidence and public administration, we ought to — together — develop respectful practices with each and every Aboriginal and Torres Strait Island nation to assist in embracing the diversity of new avenues and imagination from thinking about our world, our place in it, and new roles for policymaking’.

The paper referenced in this feature — Different paradigms of evidence and knowledge: Recognising, honouring, and celebrating Indigenous ways of knowing and being — can also be accessed free of charge by the wider public sector community until the 31 September 2020.

← Be sure to have a digital detox: maintaining your mental health under COVID-19 Upcoming ANZSOG webinar series to focus on leading people through disruption →