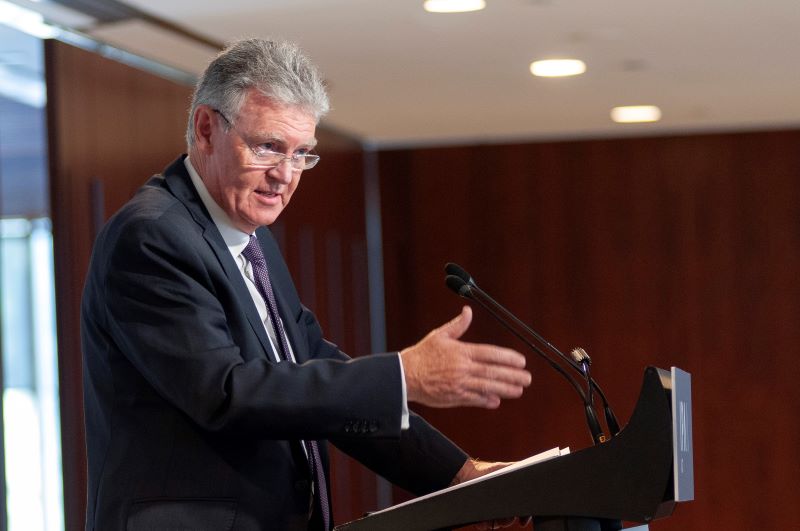 On a bright spring day in early September, Secretary of The Treasury and new IPAA ACT President Dr Stephen Kennedy thanked Duncan Lewis AO DSC CSC, the outgoing Director-General of the Australian Security Intelligence Organisation, for what he described as a “truly remarkable speech”.

Duncan Lewis served his country as a soldier, a bureaucrat, a diplomat, and then as a spy. He used his valedictory address to share some of the lessons he learned over the course of his career with quiet humour. The message he delivered, and with which he titled his address, was “it’s a privilege to serve and to lead”.

Duncan Lewis entered public service as a 17-year old cadet at Duntroon. He recalled being on a field exercise in the hills somewhere between Canberra and the coast: “It was dark, raining hard, very cold”, and he was “freezing, wet, hungry, lying face down in the muddy ground, rain dripping off the front of my bush hat onto my rifle”.

He didn’t hear his Sergeant Major ghost up behind him until there was a tap on his heel which caused him to turn around to see the Sergeant Major’s “gnarled shadowy figure”. He said “Lewis”. And Duncan, not knowing if he was in trouble, said “Yes, Sergeant Major”. In a growl the Sergeant Major said, “Always remember son, it’s a privilege to serve”.

Duncan Lewis reflected that, in that moment, the word ‘privileged’ was “the furthest thing from my mind” but that over the years he had come to recognise the power of his instructor’s comments: “it is indeed a privilege to serve”.

…I learned that there were soldiers that were far less educated than me, who had not had the same opportunities as me, but were deeply knowledgeable and had an extraordinarily highly developed moral compass, and importantly an acute ‘bull dust’ meter.

…the timeless principle I took from this raw and basic level of leadership at the team level was that you must know yourself and know your people. There’s a lesson in that for all of us in the APS context here, and I frequently see young, and indeed sometimes not so young leaders, who do not make an effort to know their people.”

Another lesson Duncan Lewis shared was that you must give a lot of your private self to those in your team:

“Your workforce spends about one third of their time — just think of this, spend about one third of their time in your charge — doing your bidding, supporting you, contributing to the targets and the objectives that you set. The lesson I learned, is that they deserve to understand and know what makes you tick. They are amazingly inquisitive, and I believe they have the right to know your views, your values, your fears and your interests. They are putting their trust in you and want to know what flicks your switch. They want to know your boundaries. They are interested in your family and your private life. What makes you happy and what makes you sad…

…You have a personal relationship with those that you lead, no matter what level you’re exercising that leadership. And like all relationships you need to put yourself into it.”

A lesson learned later in his career, when Duncan Lewis was studying at the British Army Staff College, was one he hoped his audience would remember: “Your first responsibility as a leader is to create atmosphere”.

Duncan Lewis reflected on two of the country’s most senior leaders he served later in his career: the late General John Baker and Prime Minister John Howard.

“Both of these leaders in their different ways created atmosphere around them that encouraged… it was an atmosphere where those two leaders knew and always remembered their people’s names.

Duncan Lewis observed that leadership during crisis — and in particular, during military operations when people’s lives are often at risk — provides a particular set of challenges. The lesson he took from his experience of crisis was the value of “a studied silence”.

“When crisis strikes, there tends to be a lot of rushing about, and this is a time when a leader should consider just anchoring yourself in one spot. Where people know where to find you, they’re reassured by your stillness, your stillness and calmness will become infectious…

…Now clearly people have to hurry around in a crisis, but if you’re in charge, take charge; anchor yourself and have everyone else run around.”

During his periods of study at the U.S. Army War College in 1999–2000 some of the coursework was delivered by the Harvard Business School. It was there that Duncan Lewis was introduced to a concept which stood him in good stead for future roles. The concept perfectly describes the environment in which strategic decision-making takes place: volatile, uncertain, complex and ambiguous (VUCA). Duncan Lewis observed that much of the work done by the APS in the policy area falls squarely in the ‘VUCA’ classification.

“I also learned at this time that while management and leadership as concepts have a great deal of crossover, there is a distinct point of difference. And I’m concerned when I see leaders who believe management in itself is enough.

Many of you will, I predict, face a moment in time when you must decide between doing the thing right and doing the right thing. It’s very nuanced, but it’s very important and it will come to you.”

During people’s careers ‘things happen’ as a result of various chains of events. Duncan Lewis noted that this life truism was understood by the former British Prime Minister Harold Macmillan, who when asked “What was the most difficult thing he had to manage as Prime Minister”, famously replied “Events, dear boy, events”. And so, Duncan Lewis said, it is.

“You simply just don’t know what opportunities or disasters are around the corner.

At any rate, I transformed from soldier to bureaucrat.

And then to continue the theme of events, I moved quickly in the Deputy Secretary job and then the National Security Advisor, working from Prime Ministers Rudd and Gillard. This work was indeed one of the great privileges of my public service. Proximity to the head of government was the experience of a lifetime. I had the opportunity to meet with Kings and Queens, Presidents and Prime Ministers, bishops and billionaires.”

Duncan Lewis left with his audience with a lesson he learned over many years:

“You don’t need to be the smartest person in the room to have influence and impact in that environment. In fact, it can be a distinct advantage to make your mark in those circumstances by watching more and speaking less.”

And he concluded his address by returning to where he began:

It was — as Dr Stephen Kennedy PSM remarked in closing the IPAA ACT event — “a most remarkable career”.

A transcript and video of the full valedictory address given by Duncan Lewis AO DSC CSC on 11 September 2019 are available from the IPAA ACT website. Opening remarks are also given by Mr Philip Gaetjens (Secretary of the Department of Prime Minister and Cabinet) and a vote of thanks by Ms Kerri Hartland (Secretary of the Department of Employment, Skills).